Besides the permanent collection, the Purrmann House also offers changing small-scale exhibits as well as the “In Focus” exhibition series which highlights in no particular order different creative periods and subjects from the museum’s permanent collection.

In Focus: Longing for Change
A Marriage of Artists Told in Letters 1909 -1914
Hans Purrmann and Mathilde Vollmoeller-Purrmann 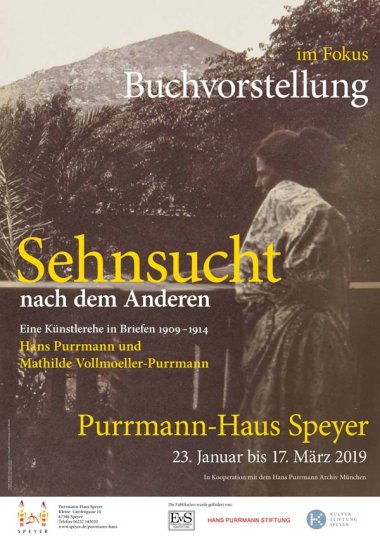 The letters of the painter Hans Purrmann (1880–1966) as well as those of his wife and artistic colleague, Mathilde Vollmoeller-Purrmann (1876–1943) from 1909 to 1914 tell the suspenseful history of the early years of their artists’ marriage in Germany and France. Contrary to the social conventions of their time, the daughter of an industrialist in Stuttgart and the son of a craftsman from Speyer got together. They became part of the tight circle around Henri Matisse. Linked by their passion for painting, Hans Purrmann and Mathilde Vollmoeller have secured a firm place in Classical Modernism. In life, as well as in their letters, they dealt with each other as equals.

Hitherto unknown letters of this artistic couple from the inventories of Speyer’s Purrmann House and the Hans Purrmann archives in Munich, have been published by Felix Billeter and Maria Leitmeyer who also offer their commentary. The correspondence is supplemented by an essay from Peter Kropmanns (Paris) and contributions by the publishers on the Paris years of Hans Purrmann and Mathilda Vollmoeller-Purrmanns.

From 23 January 2019 until 17 March 2019, the Purrmann House in Speyer is showing an exhibition accompanying the book in the small-room of the museum.

The publication was supported by the Ernst von Siemens Art Foundation, the Hans Purrmann Foundation and the Cultural Foundation of Speyer.

Welcoming address: Stefanie Seiler, Mayor of the City of Speyer

Introduction and reading by the publisher:
Dr. Felix Billeter, Head of the Hans Purrmann Archives Munich and
Maria Leitmeyer M.A., Custodian of the Purrmann House in Speyer

Musical accompaniment: Music School of the City of Speyer 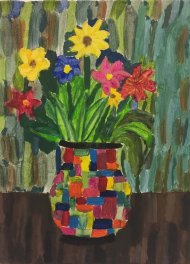 The Purrmann House has initiated a new series of exhibitions in which an opportunity will be given to school classes once a year to present their own projects. Projects that were created after a tour through the exhibition during art instruction class will each be exhibited for about 14 days.

First to get started on this will be art teacher Karin Germeyer-Kihm with her 6a class of the High School at the Imperial Cathedral of Speyer as well art teacher Jochen Frisch with his BK basic course for the current year’s graduating age group at the Friedrich-Magnus-Schwerd High School.

In Focus: Something new from the collection 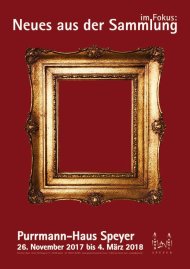 © Purrmann-Haus Speyer
Poster: "In Focus: Something new from the collection"

The Purrmann House in Speyer is exhibiting the largest public collection of paintings by Hans Purrmann (1880-1966) and Mathilde Vollmoeller-Purrmann (1876-1943). Now the exhibition has expanded with two outstanding works by Hans Purrmann from the estate of Elisabeth Albig. This niece of the painter-couple has bequeathed the oil painting, “Effigy of the Mother” (unfinished) and “Effigy of the sister, Friederike”. These works were almost certainly painted in Speyer, presumably even in Hans Purrmann’s family home, the Purrmann House as it is known today. Now they have returned to the site of their creation and taken their place alongside additional portraits of the family and other works from the painter’s early creative period. Both paintings are being shown publicly for the first time in the current small-room exhibit of the “In Focus” series, where they are being placed, through photographs and other documents from the archives, into their larger context. 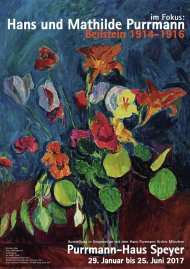 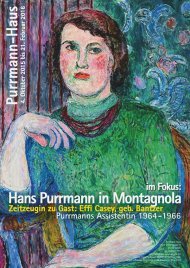 In Focus: Hans Purrmann in Montagnola 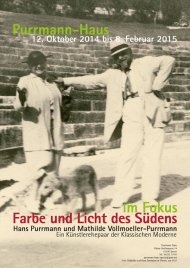 © Purrmann-Haus Speyer
Poster "Color and light of the south"

In Focus: Color and Light of the South 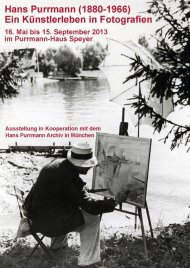