Embedded in forests and fields in the middle of the mild Upper Rhine trench, Speyer offers an ideal starting point for brief excursions to the left and right of the Rhine.

The venerable university city of Heidelberg with its romantic castle is just as easy to reach as Ludwigshafen and Mannheim with Germany's largest Baroque castle. Lying in the middle of the Electoral Palatinate, Schwetzingen maintains one of the most beautiful gardens of the Baroque and Rococo periods.

© Dominik Ketz
View from the ruin Falkenstein on the Pfälzer Höhenweg

The local saying is that to be from the Palatinate grants one "a very special seal of approval." At least, the people from the Palatinate think it is true. To be from the Palatinate, that is to be a Palatine with all one's heart and soul, means a willingness to announce it to all with a Palatine (i.e. big) mouth. The Palatine loudmouths are very proud of their homeland. They are proud of much more than their Palatine dialect, enhanced as it is with overtones of French. They are just as proud of their tasty wine, their lush landscape, and the beaming sunshine that is present in the region almost throughout the year. Not only do grapes grow here but almonds, figs, melons, sweet chestnuts, and even kiwis and lemons.

The Palatinate is a landscape that God has provided lavishly with (un)earthly delights. And from the meadows along the Rhine to the peaks of the Palatine hill country, the Palatinate's varied regions invite the visitor to enjoy every imaginable vacation activity.

The Palatinate's Rhine plain is permeated by a network of bike paths that are easy to ride on. In doing so, you pass through a region known especially for its cultivation of vegetables and tobacco as you pedal past farmsteads and half-timbered villages. The Rhine always remains within arm's reach.

To the west, you reach Palatine wine country with its "German Wine Route". In the climatically favored landscape of vineyards with its gentle hills are embedded many picturesque vintner villages and significant wine-growing towns like Landau and Neustadt.

Remains of vineyards from Roman times in Bad Dürkheim, family vineyards cultivated for generations, and wine festivals attest to the fact that here, wine is at the center of things. 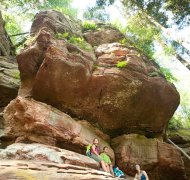 Turning further to the west, the largest continuous forested area in Germany awaits you: the biosphere-preserved Palatine forest. And with it, endless kilometers of solitary hiking paths, many rustic cottages, bizarre rock formations, and enticing castle ruins. Here everyone looking for rest and relaxation feels comfortable.

A refuge for those looking to "slow down for a while" can also be found in the Palatine hill country. It features the Donnersberg mountain as well as many hills and is located in the northwestern part of the Palatinate. On the Donnersberg, you can discover legacies from Celtic times. Numerous affectionately outfitted museums as well as the valleys of the Glan and Alsenz rivers offer further variety.

How do you choose between the German Wine Route, the Palatine Forest, the Rhine, the Palatine Hill Country, and the Donnersberg? After all, each vacation region of the Palatinate has its own special charms. Don't try to choose. Just lift your glass and toast its many charms!

And in conclusion, another tip: A well-developed public transportation network makes it possible to take your exploratory trips by train and bus. Information on how to get where you want to go may be found on the Internet by googling "VRN"; it stands for "Verkehrsverbund Rhein-Neckar". Much of their website is available in English and is oriented toward English-speaking tourists. They can provide information on excursions via bus and train to all of the sites mentioned above. They also have special reduced-fare tickets for visitors just like you. For example, you can travel throughout the Rhein-Neckar region for 24 hours by bus and train with up to four of your friends or family for only 6 euros.

It is hard to say what makes the German Wine Route so attractive. Is it the Mediterranean flair in this southwesterly corner of Germany where 1800 annual hours of sunshine make it possible to ripen figs, kiwis and lemons and the delicate pink blossoms of the almond trees make one think of Spring when it is still only March? Or is it the closeness to France that insures that the typical "savoir vivre", joy of living, and zest for life are particularly obvious here? Or is it the eventful history whose stone witnesses - remains of Roman settlements, castle ruins, palaces and estates - the visitor encounters with almost every step? Or maybe it is the magic of the dreamily picturesque wine-growing villages with their vineyard-bordered streets or the charm of the gently hilly landscape of vineyards surrounding them?

The Creator, let's face it, did a great job making this swath of land. That is demonstrated year after year by the hundreds of thousands who make the wine-growing portion of the Palatinate their objective for a one-day excursion, a short vacation, or even a long one. And the question of whether it is the mild climate, the comfortable lifestyle, the Palatine landscape, or its rich history that draws them here is, given this vote with the feet, a rather irrelevant, almost esoteric argument.

Further information may be found under German Wine Route.

The Rhine-Neckar region includes the cities of Mannheim, Ludwigshafen on Rhine and Heidelberg as well as their surroundings. Since January 1, 2006, the region also includes the rural Neckar-Odenwald region as well as the South Palatinate. That area is for the most part identical with the core region of what was historically known as the Electoral Palatinate which is why, despite today's division of the Electoral Palatinate across three of Germany's federal states, close social and cultural connections have always been there.

Romanesque Imperial Cathedrals along the Rhine

St. Martin's Cathedral in Mainz, St. Peter's Cathedral in Worms and the Cathedral of Speyer together form a marvelous group of Romanesque imperial cathedrals on the Rhine, providing impressive evidence of the splendor of German architecture in the early Middle Ages. Marvelous architecture, historical opulence, and fascinating stories entwine themselves like foliage around these ecclesiastical witnesses to history. Theirs uniquely is that special atmosphere paired with beneficial stillness and exalted size. Impressive wonders of stone that can still amaze us today. Further information may be found under the Romantic Cities above.

The German Center for Tourism describes the fascination with UNESCO World Heritage Sites as follows: “They are the best that man and nature have produced.”

Only the very best of the many outstanding witnesses to the history of humanity and nature are allowed to carry the title of UNESCO World Heritage Site. The Speyer Cathedral is one of those; it was added to the list of World Heritage Sites in 1982. It serves as an outstanding testimonial to Romanesque architecture.

Its benefactors were the Salian emperors who had it built in the 11th century as the largest church in the then-known Western world in recognition of their responsibility for all of Christianity. Because of its size, it is the largest monument of this era and because of its history, it is also the most important because the Salian emperors also made it their final resting place.

All told, Germany is represented by 37 World Heritage Sites.

Alsace - a Region in the very heart of Europe

Impressions of a trip through Alsace come across almost as a cliche: quaint little villages with centuries-old half-timbered houses and stork nests on their roofs, inviting wine landscapes, and culinary treats like Alsatian "Flammkuchen". These easily gained first impressions have made Alsace world-famous.

The three best-known cities in the region are Strasbourg, Colmar, and Mulhouse. Strasbourg entices with a gorgeous old town center and what was until 1874 the tallest building in the world, the Strasbourg cathedral. In Colmar, there is a special feeling in the old town reminiscent of the Middle Ages that invites the visitor to tarry a bit. Mulhouse beckons the visitor with museums, a zoo and a botanical garden. Further information may be found under Alsatian Pleasures.

CURRENT INFORMATION WITH REGARD TO COVID - 19

According to the current loosening of the state Rhineland - Palatinate, the gastronomy will be open for you again from 13.05.2020.