The “New Store at the Market” has stood since 1748 on the site of the old mint.

© Klaus Venus
Street cafe in front of the old mint 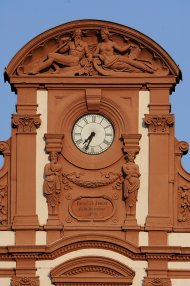 After a series of fierce controversies between bishop and citizenry in the 12th and 13th centuries, Speyer became a Free Imperial City in 1294 and thereby earned the right to mint and issue coins. They built the house of the minter, which also served as the office of the city council.

After the destruction of Speyer in 1689, this imposing Baroque building was built. It was, until well into the 19th century, the transshipment point for trade and later became the seat of various authorities.