The St. Magdalena Cloister has survived the centuries as the only one of originally 60 former cloisters in the Palatinate. 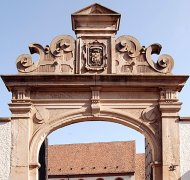 The St. Magdalena cloister has survived the centuries as the only one of 60 former cloisters in the Palatinate. In 1228, the community moved from Reuerinnen on the right bank of the Rhine to Speyer where, in 1304, they requested to take up the Dominican order. The women of the order have dedicated themselves since then to the education of girls and they operate many schools. On the spacious cloister grounds, a six-axis nave was built for the church in the early 18th century on the walls of the original Gothic construction. The former schoolhouse dates from 1832.

Between 1923 and 1931, the school was the domain of Dr. Edith Stein, the philosopher and Carmelite who was murdered by the National Socialists. She had converted in 1922 from Judaism to Catholicism.

You enter the facility through a gateway built in 1889. There are still old grave crosses, most of them from the 18th century, to be seen in the wall around the cloister facility.

CURRENT INFORMATION WITH REGARD TO COVID - 19

According to the current loosening of the state Rhineland - Palatinate, the gastronomy will be open for you again from 13.05.2020.