Adenauer Park is a place of quiet and beauty right in the middle of the city; in its diversity, it is a seriously underestimated bit of nature. Anyone who appreciates time for meditation on a bench surrounded by greenery or is looking for a place steeped in history at which to dream about the future, will find here a place that can inspire time-travel just a few steps from the Speyer train station.

In the park known as “The Old Cemetery”, one can see an entire series of old gravestones. Since July 2017, this is also the gravesite of former German chancellor Dr. Helmut Kohl.

The mood that prevails there is unique. Under gnarled trees stand gravestones tipped by the wind along with crosses and columns overgrown with ivy, ferns and shrubbery. Some are so weathered that the inscriptions are no longer legible. Even broken slabs overgrown with grass can be found if you look for them. Between the gravestones there is shadowless light and above them, only the tweeting of birds and the rustle of leaves. A more romantic picture representing the impermanence of earthly things would be hard to imagine.

Hidden behind trees stands the Gothic chapel, the construction of which had already been completed in 1516. Four years later, the Mount of Olives was carved out of sandstone. During the Reformation, the chapel plus the cemetery surrounding it was adjudicated to the Lutherans. It remained the only Lutheran church in Speyer until the  consecration of Trinity Church in 1717. Today, this little old cemetery church provides an attractive background for a chamber music series for a few weeks every summer. Music has been presented here by choruses and orchestras for the past twenty years.

The Cathedral Garden in Speyer – a reflection of the Salian emperors

But in what sense are the Salian emperors of special significance here? The City of Speyer has a lot to thank the Salian rulers for because through the efforts of Emperor Conrad II, Speyer moved into the center of the kingdom’s politics and then developed during the Middle Ages into the spiritual center of the Salian empire.

Testimony is provided by the so-called emperors’ graves that are to be found inside the Speyer Cathedral. Here lie emperors and empresses from the times of the Middle Ages. Among them are the tyrannical Emperor Henry IV, known for his penitential pilgrimage to Canossa in 1077. And Emperor Conrad II, founder of the Salian royal dynasty, King of East Francia, King of Italy and King of Burgundy. The body of King Rudolf of Habsburg also lies here; he was one of the most popular German rulers during the Middle Ages.

Klaus Venus, © Klaus Venus
Site of the twin towns of the city of Speyer in the cathedral garden

The fact that these emperors were closely connected to the city is shown by the following old Speyer saying that is derived from the dream of a ferryman. In order to assist the empire during times of great need, the emperors would come from the cathedral to the bank of the Rhine and call for the ferryman to cross the river: “Ferryman, get yourself over here!”

The sculptural group that reproduces this legend was donated by the Tourist Office, and executed by the sculptor, Günther Zeuner. It is located in the lower part of the Cathedral garden, very close to the mini-golf facilities.

Yet another group of figures portrays the city’s connection to the Salians. The stone quartet in the Cathedral Garden is the result of an order placed by the Third Reich’s Minister of the Interior in March 1937 with the sculptor Ludwig Cauer from Bad Kreuznach. Initially in 1938, the four groups of figures were to be set into the niches of the cathedral’s apse. But Bishop Ludwig Sebastian turned that idea down and therefore they found their place in the Cathedral garden along the path from the Cathedral to the fairgrounds.

The passenger ship Pfälzerland swings its bow across the Rhine and steers toward the shore of the Rhine that lies across from Speyer in what was once the state of Baden. Passengers scramble onto the deck of the passenger vessel, accompanied by the continual whooshing of the bow waves that the Pfälzerland is pushing ahead of itself. Their goal: the Old Rhine Flood Plain.

This refuge for natives and tourists alike can also be reached comfortably in one’s own car or bicycle. The footpath guides nature-lovers along the “Industriestraße” in the direction of the parcel post office, located behind Speyer’s airfield,. Alternatively, Speyer's ferryboat will also get you to your goal.

© Rhein-Pfalz-Kreis
Sunshine at the old Rhine

An unexpectedly impressive encounter awaits you. The flood plain’s landscape is defined by its periodic flooding which is responsible for its unique assortment of plants and animals. Would you like to take an unusual walk? Just look around and you will see redwood trees along with vines that make you have to elbow your way through the nature at its wildest. Wildlife preserves — such as, for example, the Old Rhine in Berghausen — is one more of the special experiences that Speyer has to offer.

Binsfeld – here watersports and leisure are written in capital letters.

Far away from the hubbub of the inner city, a hiatus in the countryside awaits you, right in the middle of the nearby recreation area called Binsfeld. Here, forgetting everyday stress comes easy while enjoying nature beside Lake Binsfeld, north of Speyer. 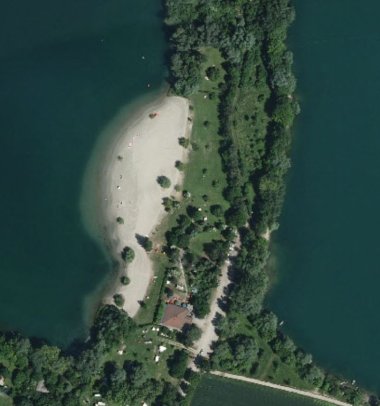 © Stadt Speyer
Aerial view of the beach at Binsfeld

The entirety of Binsfeld includes the smaller lakes, Speyerlachsee, Mondsee, Sonnensee, Biersiedersee and Silbersee. The three largest lakes, Binsfeld, Kuhunter and Goose Droppings Lake are connected to one another. Together, they form a beloved destination for both native and tourist day-trippers.

The entrance to the parking lot near the Störtebeker restaurant is easy to find. The “Störtebeker” spoils its guests with German-Greek cooking. The kiosk Zum Seeblick further north alongside the Sonnensee serves smaller portions but keeps hungry mouths from going home empty.

You may want to keep going to the sandy Binsfeld beach which most prefer. To get there, you steer into the parking lot that lies on the northern side of the Silbersee. After you have parked your car, you have to travel the rest of the way on foot. At the end of the straight stretch, you will already see the roof of the beach stand on the water’s edge.

On the banks of Lake Binsfeld, visitors relax on beach towels, picnic blankets and lounge chairs that they have brought along with them. The established beaches at which swimming is allowed also have lawns for sunbathing; they make the hearts of every water lover and sun worshipper beat faster. You will know you are at a beach!

If you crave a little snack, such as a portion of French fries to go or you would like to cool off with a glass of half Palatine wine and half sparkling water, a splash of Aperol or some ice cream, will find them at the little family-operated beach stand.

Want to take a dip in Goose Droppings Lake? No problem! In this northerly lake area, swimming with equipment is allowed. The Kuhunter Lake, which is the southern extension of the Goose Droppings Lake, provides oarsmen and oarswomen the chance to pursue their passion.

One additional tip for dog owners: scurrying and splashing for our four-legged friends is possible at your discretion at the designated dog beach.

You can reach the local recreation area at Binsfeld with your personal car, a bicycle or one of the rentable town cars (Stadtmobil).