Small, hidden and a bit improbable. Our insider tips are designed for everyone who would like to experience, not just the known highlights of a city like Speyer but its citizens’ lifestyles and attitudes as well.

Surprises in Speyer / Some insider tips

Location on the Rhine

Today’s Cathedral City (as Speyer likes to call itself) is as well located strategically as it has always been. Accessible and open, the river is Speyer’s portal and its connection to the world. The Rhine has always had an impact on a people who are flexible in mind and spirit, ready for confrontation but always able to compromise and adapt.

The Rhine promenade is nothing like its big sister, Maximilian Street. But if you are looking for a pleasant mile’s walk with a marvelous panoramic view, look no further. This should not surprise you since the promenade between Old Town and the river was newly structured several years ago and it now has quite a lot more to offer than just the view of passing ships.

The Old Hammer has Speyer’s oldest beer garden and it wants its guests to allow themselves to be spoiled by hearty Palatine specialties. Good bourgeois cooking and light snacks with a cool beer or some other liquid refreshment become an unforgettable experience when coupled here with the view of Father Rhine, as we like to call the river.

Right across the street and right on the Rhine Promenade at Rheinallee 4, RENTSCHLER'S Café/Restaurant, offers regional as well as Mediterranean cuisine. The big terrace guarantees an idyllic view of the Rhine when the weather allows it. Accessibility is assured both inside and outside this restaurant.

The Rhine Beach with a (would you believe it?) Copacabana atmosphere

On the tow path behind Bademaxx and the youth hostel, you’ll find a jewel of a spot that brings a Mediterranean feeling right into our city. “La dolce Vita” on the Rhine beach in Speyer takes the form of an approximately 16,000 ft2 fenced oasis that has been covered with tons of fine sand. This popular location is the perfect spot to have a sundowner in good company while relaxing on your own deck chair, hammock or one of the spaciously designed comfort beds. You are now enjoying Speyer’s romantic or may we say it, exotic side. A beach bar and a beer-garden deck round out that beach vacation feeling.

Better yet, it costs nothing to get on the Rhine Beach; the only condition is that you not bring your own food and drink with you. But you can still stick the bottle of Veltins  you purchase into the sand and sip your cocktail as you gaze on the softly curved bend of the Rhine. Men, women and children are dozing in deck chairs all around you. Most have dug their feet into the sand and are watching the quietly droning barges navigate the wide street of water you see before you.

Ecclesiastical Grandeur and Places to Gather

© Klaus Venus
Towers of the city of Speyer

The Celts and the Romans settled in Speyer. And since the fifth century, it has been a diocesan town. When the Salian dynasty was ruled by King and Emperor Conrad II, the city became a hub of the Roman empire. In the 16th century, the Reichstag (Imperial Diet) met here four times, which some say proves that Speyer must be a congenial host. And don’t forget the Diet of Protest which was held in Speyer and which led to the schism within the Church. And Speyer’s Jewish residents have influenced the city since the 11th century, providing a thoughtful Jewish community.

The résumé of the Cathedral City is truly impressive, wouldn’t you agree? The city’s moving history and that of its people come to life in many of the monuments and attractions that portray the lively interaction of religions and cultures here. We have put together some examples for you:

Grand and mighty, the city’s landmark — the Imperial Cathedral — towers above the Rhine and is not far from its shores. It is recognized as the largest surviving Romanesque church in Europe.

Speyer’s Cathedral owes its existence to the Salian emperor, Conrad II. After his election, he pursued the ambitious goal of building the largest church of his time. Conrad did not himself experience the consecration of the Cathedral in 1061. And in 1080, his grandson Henry IV had the Cathedral rebuilt from the ground up which gave it the form we see today. With the destruction of the Abbey Church of Cluny, the Speyer Cathedral became the largest Romanesque church anywhere.

Four emperors, three empresses and kings from the houses of Habsburg, Staufen and Nassau are all buried in the Cathedral. That makes it the most significant royal burial ground of the Middle Ages on German soil. 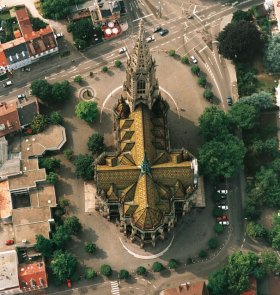 The Lutheran Trinity Church surprises the visitor with its baroque splendor. Its richly painted wooden arch and lots of wood carvings here are well worth seeing.

The Neo-Gothic Memorial Church has a 328 foot spire which makes it the highest church tower in the Palatinate. It also impresses with beautiful stained glass windows and a defiant statue of Martin Luther in the vestibule.

The Memorial Church - Built in just 10 years (1893-1904) based on the design of the architects, Nordmann and Flügge from Essen, it was seen as a monument to world Protestantism and financed by donations from evangelicals around the world. The architecture is Neo-Gothic in the style of a French cathedral of the 13th century. It has a ribbed vault and is laid out in the form of a Latin cross. The tower is, at 328 feet, the highest church spire in the Palatinate.

Great Artists and the Houses in Which They Were Born

Ready for a colorful foray in which Henri Matisse will play a role? In the Purrmann House, you can follow in the tracks of a painter born in Speyer who was a friend and student of Henri Matisse. In his family house here in Speyer, you will find the largest public collection of his works as well as exhibits of his wife Mathilde’s works. She was also a student of Matisse and made a name for herself as an artist in her own right. Take the plunge into the colorful and fascinating life and the artistic accomplishments of this exceptional married pair of artists.

© Klaus Landry
Garden of the "Feuerbachhaus"

Let’s continue the artistic house-hopping from Purrmann to Feuerbach. The collection in his house of birth emphasizes the early works of this colorist who is famous for his large format ancient and mythological paintings. The cozy Biedermeier wine bar offers the opportunity to let the impressions you’ve collected linger on.

Want to experience a more intimate look into the lives and art of Feuerbach and Purrmann? Our tours make that possible. You can conveniently book tours through both the Purrmann and Feuerbach houses online.

In Speyer’s Culture Courtyard on Linseed Lane, great things are happening culturally — without the linseed of course. The Art Association, the Municipal Gallery and the Corner Print Shop are open year-round with interesting exhibitions and functions for your enjoyment.

© Reinhild Günther
View from the Imperial cathedral to the city centre

There is no question that the view from the west tower of the Cathedral is spectacular. If you can manage to climb the 305 steps to a height of 197 feet, you will be rewarded with a grandiose view across the entire city — if the weather is good, you will be able to see as far as the Palatine woods whose hills are more than 15 miles away. This is where you can get a ticket.

Or would you prefer a little bit of Rhine romance? Rumor has it that sunsets take on a particularly charming character along the gravel beach on the Baden side of the Rhine and from under the Baden half of the Salian Bridge.

The sun bids you “Good Night” here by highlighting Speyer’s skyline in the last rays of the sun as the night closes in. You don’t have to be young and in love to be charmed by this spectacle. With a cozy blanket and a bottle of wine, this can be the perfect conclusion to the day for anyone willing to engage with the city on a romantic level. We will be happy to advise you on the  most appropriate method of getting to the perfect spot.

The Old City Gate was Speyer’s western city gate and part of its fortifications during the Middle Ages; there were 68 wall and gate towers. Facing the Cathedral to this day, it forms the other end of Maximilian Street. The view from the platform at the top of the tower is impressive too.

The burial place in Speyer of retired Federal Chancellor Dr. Helmut Kohl is located in Adenauer Park at the border with the Cathedral Capitular Cemetery and next to the St. Bernhard Peace Church. The location is steeped in history and has strong symbolism.

The church was built by French and German citizens as a “symbol of peace and reconciliation”. At the laying of the cornerstone in 1953, Federal Chancellor Konrad Adenauer (CDU) and the former French Prime Minister and Foreign Minister Robert Schumann were both present.

As a symbol of reconciliation between the French and the Germans, the church was designed to be simple in form and reflect the style of a Cistercian abbey. Kohl devoted part of his life to the reconciliation of the two peoples. The handshake between him and Francois Mitterand in 1984 at the Soldier’s Cemetery in Verdun added to his great legacy. The symbolic gesture of that moment and the choice of his last resting place emphasize Germany’s very special relationship to France as reflected in the life of Helmut Kohl, the great politician.

Discoverer of the Pinot Gris

Imagine you purchase an overgrown garden and discover on it some vines loaded with gray-brown grapes. You process these, pour the resulting liquid into a barrel and after some time passes, you taste it. You are surprised by the sweet and mellow wine that has resulted.

That is about what happened, according to reports, once upon a time in 1711 when the Speyer merchant, Johann Seger Ruland discovered the wine called “Ruländer” in Speyer but better known today as a pinot gris or pinot grigio. Have you experienced the taste?