The old city gate was Speyer’s western city gate and part of the Middle Ages fortification that consisted of 68 wall and gate towers. Facing the cathedral, it defines the end of Maximilian Street.

Construction started in 1230. Three hundred years later, the topmost floor of the tower with its late Gothic tracery balustrade and arcade arch of the gallery were added. The steep roof with the lantern has its origin in 1708. At 188 feet, it is one of the highest and most significant city gates in Germany. It shows its richly articulated side to the city; the embrasures on the west side allude to the defensive function of the tower. 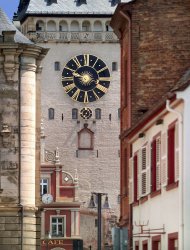 On the northern side of passage through the old city gate, an iron bracket has been installed. It represented Speyer’s measure of length. Speyer’s normal foot, as it was called, was, at 28 centimetres, the measure of length for all things offered by every tradesperson in Speyer. Thanks to some fortunate circumstances, the tower survived the destruction of the city in 1689 and remained as it was then to become one of the few remnants of the city’s fortifications during the Middle Ages.

If you climb the tower, your effort will be rewarded with a wonderful panoramic view across the city. After renovation work in the interior of the tower, a permanent exhibition now documents the history of Speyer’s city fortifications and the old city gate. The name, old city gate provides a riddle: the derivation of the Latin alta porta = high tower is no longer the case.

On each of the east and west sides of the old city gate, two clock dials have been applied. The pointers on the large dials point to the hour and the pointers on the small dials show the quarter hours. In earlier times, the hour was the most important indication of time. That is why the clock dials that give the full hours are significantly bigger than the dials that “only” give the quarter hours. Moreover, the hour dial is bigger on its outside so that travellers could already recognise what time it was while still some distance away from the city.

Make the effort and climb the tower (wonderful panoramic view across the city!). After renovation work on the interior of the tower, a permanent exhibition was installed on the second floor to document the history of Speyer’s city fortifications and the old city gate.

Exhibition about Speyer´s Imperial Chamber Court from 1527 to 1689

Since 13 June 2014, visitors have been given the chance to visit an exhibition at the old city gate “Altpörtel” about Speyer´s Imperial Chamber Court.

Accompany us on a tour through the old city gate and follow the traces left of Speyer’s medieval city fortification.